Now that we’ve introduced you to a few of the best survivalists who explored the world and came out on top in intense, life or death scenarios, you’ve got no excuse to be a homebody. And remember when you travel that real Adrenalists don’t stay in hotels. They camp in the great outdoors, heartened by the natural beauty and excited by the idea that, around any corner, at any moment, a life-threatening danger could be lurking, whether in the form of extreme weather, wildlife, plummets or any number of other unforeseen heart-stoppers. We haven’t scared you, have we? You are all Adrenalists after all. So, what are you waiting for? Get out and camp the way true adventurers do! 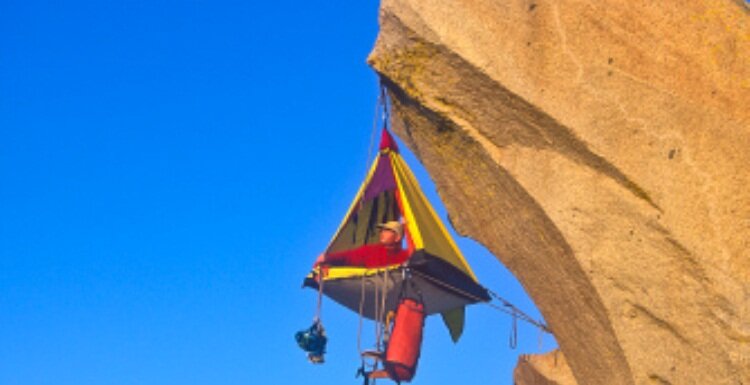 Remember way back when we wrote about portaledges, those little sleep pods that climbers artfully suspend from mountain ledges hundreds (sometimes thousands) of feet above ground, catching a few winks as their bodies swing from ropes that could come undone at any second? If so, then it should come as no surprise that we still think camping cliffside is one of the most extreme ways to go, and it can be done anywhere, on any mountain, as long as you have the proper equipment and the ability to be so relaxed in mid-air that you actually fall asleep.

We all know climbing Mount Everest is one of the most dangerous expeditions you can undertake, so it should come as no surprise that the mountain’s notoriously vicious climate and topography present camping challenges as well. Note that we’re not talking about Base Camp, folks. We’re talking about the Death Zone. So-called because of its high altitude (over 26,000 feet), short oxygen supply, frigid temperatures and change-on-a-dime weather patterns, the Death Zone is the most treacherous stretch of mountain before the summit…and climbers sleep there, in a little place, called Camp IV. At 8,000 meters (26, 300 feet), the Death Zone marks the point at which the humans can no longer acclimate to oxygen deficiency and, if they don’t have oxygen tanks, begin to slowly die. Naturally, most climbers sleeping at this height opt for a supplemental oxygen supply.

Yes, this is not a mistake. The entire state of Arizona is an extreme camp ground. Here’s why: poisonous critters. From black widows to bark scorpions (considered the most poisonous type in the US) to giant biting desert centepedes and intensely toxic Mojave rattlesnakes, you’ll need to keep a bite treatment kit and a cell phone nearby if you’re planning a trek out to The Grand Canyon State. It’s a land of great beauty, but one that requires visitors to keep their heads on a swivel and their tent flaps closed very, very tight.

600 miles off the coast of Ecuador lie the majestic Galapagos Islands, home to a plethora of exotic wildlife and some of the most stunning natural beauty in the world. But campers beware: the islands are also home to some serious threats, including bullet ants whose stings rank at a “4+” on the Schmidt Pain Index – the highest rung — and are said to leave victims feeling like they’ve been shot or stabbed in the heel with a rusty nail. It’s because of bullet ants and exotic insects like them that the best way to “camp” on the Galapagos is in an elevated tent or other makeshift shelter raised off the island floor. Who knows what could be lurking below your sleeping frame?

Stealth camping describes the process of setting up a campsite in any environment — whether sanctioned as a campground or not — sleeping and leaving before anyone knows you were there. It’s invigorating, because of the risk factor — the idea that you may get caught somewhere you’re not supposed to be and yelled, arrested or worse (eaten by an alligator, perhaps, if you’ve set down beside a lake in Florida). For all the reasons on this list and countless others, it’s extremely dangerous. Campsites are campsites for a reason — they’ve been designated as relatively safe by experts who know the terrain. When you decide to buck what’s been established to find your own spot, you’re taking your safety into your own hands to a much greater degree than you would setting up shop at a sanctioned locale.

But hey, for an Adrenalist, that’s what life’s all about.