Panama is one of the most beautiful countries in Central America, with breathtaking jungles and mountains abound. The country is the site of one of our favorite adventure races and one of the most impressive surf records ever set. Panama is also a ridiculously hot and humid country. High in the hills of green mountains sits Boquete, a cool and breezy town that offers respite from the heat. Boquete maintains a cool climate because it’s located 1,200 meters above sea level. Boquete is a beautiful small town with a knack for a delicious coffee. It’s also known for nearby Volcan Baru, the tallest peak in Panama at 11,398ft. Baru is something else, isolated from the neighboring peaks, jutting suddenly out of the jungle, all by itself. On a clear day at the summit, you can see both the Pacific Ocean and the Caribbean Sea. How can you pass up seeing two oceans at once? It’s a great hike with some stunning views, and the ultimate reward is the view from the peak. 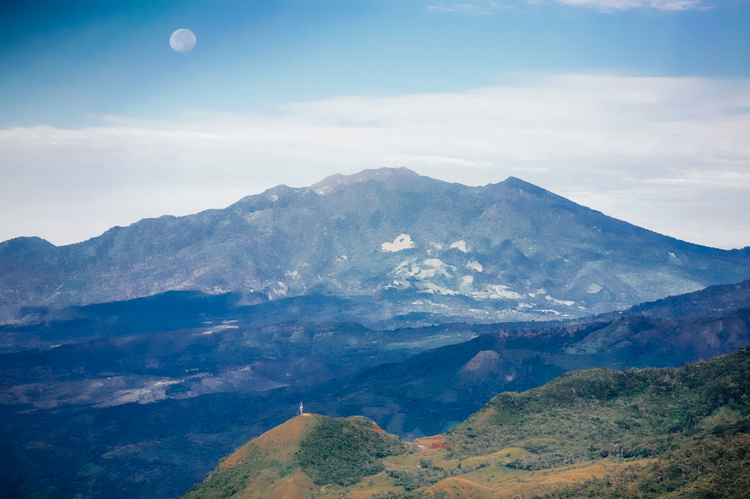 Most people begin the Volcan Baru hike at about midnight, which lets you see dawn from the top of Panama. This also gives you the best chance of catching views of the sea, since the afternoons tend to be rainy. Local hostels will provide will give you a ride to the trail head for a small fee.

The trail head begins in a humid jungle, but don’t forget your jacket. The relatively strenuous hike takes you to a peak where the temperature hovers around freezing. In other words, this is a peak of contrast, splitting the oceans and climates. Many is the hiker who, starting off on a warm night, winds up drenched in sweat right as the temperature plummets, leaving them shivering on the peak waiting for the sunrise.

The trail is moderately strenuous. It’s definitely a work out, but nothing that someone in moderate shape wouldn’t be able to conquer. In this way it’s a good warm up for the even taller peaks in Costa Rica, which you’ll encounter if you are traveling through Central America.

Once you get past the rocky trail, you’ll come to the windy, frigid peak. Remember this bit of wisdom about the peak’s conditions, or you may wind up borrowing extra warm clothing from a companion. Suddenly, your emergency mylar blanket might become a necessity.

The beautiful view from the Volcan Baru peak, however, is more than worth it. You can see across the whole isthmus, the fields and mountains. Because Baru is a volcano, not a mountain in a range, you have the feeling of standing on the edge of the abyss. You can literally stare down thousands of feet. Undoubtedly, this is a hike every adventurer should experience. Serious Adrenalists can top off their hike by paragliding off the famous peak and returning to sea level in style.