If you haven’t heard about Tough Mudder, then let us explain. It’s a 10-12 mile course laced with such extreme obstacles that merely finishing takes the grit of an Adrenalist. They dot the course like land mines and you never know when your team will get stuck or hit a wall, figuratively and literally. That’s because the obstacles combine water, fire, ice, walls, electric shock and, of course, mud. 22 percent of its entrants don’t finish. That’s almost one in four that pay their entry fee and can’t make it all the way. Enter at your own peril, finish with your own rock-hard will.

If you’re thinking about rising to the challenge, we’ve already detailed how to survive your first Tough Mudder, but we’d also be remiss if we didn’t highlight some of the toughest trials you’ll face.

Here are the five hardest obstacles of Tough Mudder.

Don’t be fooled: there is absolutely nothing therapeutic about this obstacle. Mud is abundant (you’ll find this is a theme throughout the course), but the mud doesn’t zap you; that’s the job of the 1,000 overhanging wires. Some of them carry up to 10,000 volts of electric shock that will assail you with a bit more than just the tickle of static from your computer. Some competitors try and avoid the wires altogether, while others barrel ahead hoping to finish quickly, wires be damned. The obstacle course is only about 20 feet wide and 40-50 feet long, but it’ll be the longest 40-50 feet of your life.

Hay bales sit within the mud floor as barriers, so even though the wires hang five feet in the air, you’re forced to be shocked at least a couple times, no matter how diligently you pick your way through the course. Regardless of your strategy, this is a very charged challenge. 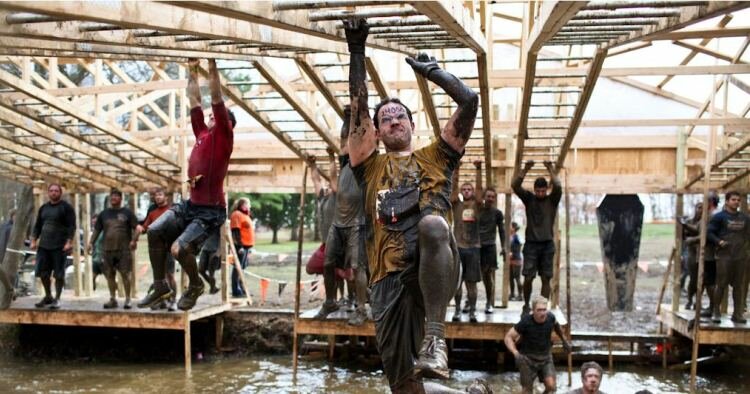 Remember how much fun the monkey bars were when you were in grade school? Well, this is not grade school. First, some of the bars (you don’t know which ones) have been greased with butter and mud so gripping them is difficult (though if you read our preparation guide, you’re hopefully wearing gloves, which can add traction). The bars are spaced 1.5 feet apart, but you start off on an incline and then finish on a decline, so if you’re churning your legs to give you momentum on the way up, you better slow down on the second half.

Do be prepared to slip and fall into the icy pond below. Every body of water in Tough Mudder is freezing.

A half-pipe doesn’t look all that imposing when there’s a skateboarder rolling up it, but the slick quarter-pipe that makes up the Everest challenge requires speed, balance, traction and, most importantly, teamwork if you hope to climb over the monstrosity. The Everest quarter-pipe is composed of about 3 tons of plywood implacably constructed 15 feet high and 35 feet wide. On the inclined front of the ramp is Fiber Reinforced Plywood (FRP) that’s glossy and smoother than regular wood. Throughout the day, organizers douse the front side of Everest with soap, mud, water, vegetable oil and any other lubricant they can find to make it as hard as possible to reach the ledge.

As we said before in our preperation guide, you really need teammates for this challenge. Most Mudder teams will form a human chain to get their first teammate to the top so they can then help pull the others up. Without a helping hand, the best way to attack the ramp is to provide yourself ample running room to reach full speed leading up to the inclined portion. At the exact last moment before you fall on your face at the apogee of the ramp, you have to jump to catch the edge. No easy task with a team, and nearly impossible by yourself. It’s called Everest for a reason, and it’s foolish to go it alone.

When you pull a muscle, you may use ice to alleviate the swelling. When you enter the Arctic Enema, however, there will be no end to the swelling and cramping your body will experience in its bitter cold embrace. A dumpster filled with ice water is your environment. You have to paddle your way under the middle plank (which has barbed wire on top so you can’t climb over) and through to the other end of the dumpster before summing up all your remaining strength to climb back out if your team isn’t pulling you.

Between 70 and 80 thousand pounds of ice are used to keep the temperature of the dyed water between 34-35 degrees Fahrenheit all competition long. That’s as close to freezing that water gets. If you try and wade in, your muscles will be paralyzed from the cold and you’ll be unable to swim under the plank. Hypothermia is not out of the question. Like most things worth doing in life, you just gotta jump in and plunge ahead with the mental fortitude to keep moving. The Arctic Enema is as much a psychological challenge as a physical one. 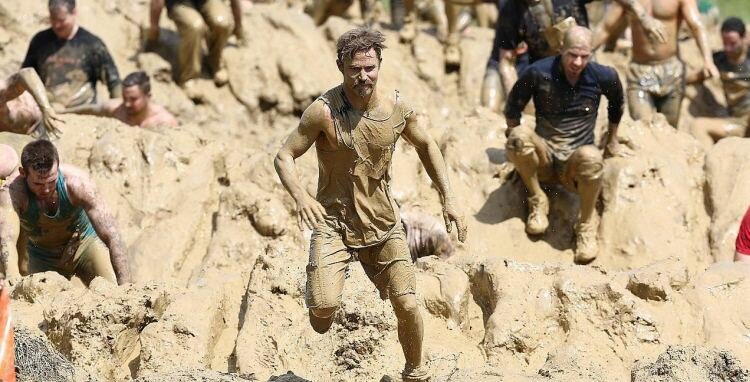 The Mud Mile might end up being the longest mile of your life. The layout is simple: 1600 meters of waist-deep sludge. Anyone that didn’t think mud would be involved in the Tough Mudder isn’t thinking very clearly. Perhaps they’re mentally drained from trying to grab their now-cemented sneakers from the sticky, dank brown that’s all around them. At some stretches, on certain courses, participants have to fully submerge themselves in the mud in order to reach the finish. This is sloppy, slippery, repugnant and most likely infuriating mud times a thousand and cloying through it is a physical and mental burden worthy of only the Tough Mudder course.

There you have five of the hardest Tough Mudder obstacles, but there are many, many more. Consider yourself warned.

If you want to learn more about Tough Mudder, visit ToughMudder.com.