Feet: molded by 4 million years of evolution to efficiently propel you across the earth and keep you comfortably upright. But you wouldn’t go barefoot on a soccer field or at the gym (bacteria, fungus, broken toes…hello). Despite the near-perfect design of the human foot, modern perils make it unwise to break a sweat unshod. Enter the Vibram FiveFingers, the Nike Free, and similar minimalist shoes that maximize the power of the pure foot. But those are just a couple athletic footwear innovations of the recent past.

Walk like an Egyptian? More like walk like Masai. The design of these thick-heeled shoes was inspired by the upright posture of the East African tribe. Masai Barefoot Technology, or MBT, shoes make you work — that’s the point. They create a “natural instability” on your feet, forcing your body to compensate, and in the process, become more strong and healthy. At least one study has confirmed the claims (and hey, MBT has nearly 9,000 Likes on Facebook). But others aren’t so sure about the efficacy of MBT. If you have back problems and nothing else has worked, these shoes are certainly worth a try.

Don’t call them Moon Boots, Kangoo Jumps aren’t just for fun, they’re for getting fit and doing so “safely.” According to the official literature, Kangoo Jumps reduce joint impact by up to 80%. There’s no coming down hard with this space age footwear because soon as you drop, you’re well on your way back up. And if the standard model tension band isn’t bouncy enough for you, install the super-powered steel spring. The more bounce, the better protected you’ll be from joint wear. Oh yeah, and wrinkles too. The company says ”rebounding regularly with Kangoo Jumps will firm your skin and increase its elasticity.” Crazy? Crazy like a Kangaroo.

If you read basketball magazines in the ’90s, then you’re probably familiar with ATI training shoes. Walking around in these ball-platform shoes shifts weight that’s normally loaded on your heel to the calf and Achilles — the main muscle and tendon associated with getting up. These shoes will increase your vertical by 5-10 inches when you jump to shoot a basket, says ATI. But don’t expect the lift without putting in the work. ATI Jump Training shoes also come packaged with a 52-week training regimen.

Now we’re getting closer to real bare feet. RunAmocs, made by Soft Star Shoes, came about as an accident. The company had been making minimalist thin-soled shoes for years when in 2010, reports started trickling in that people were running in them. And so Soft Star went all-out athletic, and by that we mean they barely changed a thing about their tribal-hippy foot coverings — just adding some ventilation and sole flexibility. The RunAmoc is designed to let you use all 26 bones and 33 joints in each of your near-perfect natural feet.

Want the minimalism of the RunAmocs with the excitement of a modern athletic shoe? Check out the Zem O2. Unlike Vibrams, Zems have just one mitten-like “toe” or Ninja Turtle two. Derek Fisher’s trainer swears by Zems. So does beach volleyball legend Sinjin Smith. Maybe it’s because they’re so light: just 2.5 ounces compared to the average 10+ ounce running shoe. But don’t go all out Zem just yet. Like all minimalist athletic shoes, traditional athletic shoe wearers should transition gradually into Zems. Run a Zem 5K before you run a Zem marathon. Your feet must adapt to their new thin skin. 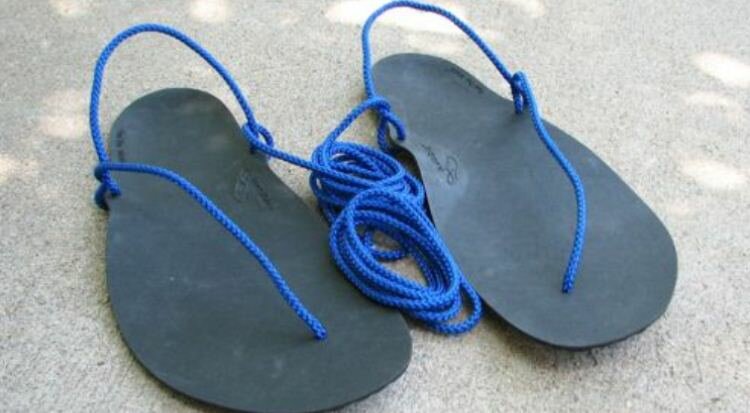 This is as minimal as it gets without baring your sole. Invisible Shoes aren’t really “invisible,” they’re just barely there. Inspired by the “huaraches” worn by the Tarahumara Indians of Mexico, who in two days can run 200 miles or more through the rugged Sierra Madre, Invisible Shoes are made of just two parts: soles and laces. They’ve made some runners wonder why shoes were ever made differently.