The day-to-day business of running an H1 racing team isn’t for the faint of heart. That’s why we sat down with the director of operations, Adam Gregory, to get his side of the story. Check out was Adam has to say about running the show from behind the scenes.

What is your role on the team? How did you get involved?

My official title is director of operations, and I handle all aspects of the business associated with USA racing. We leave the racing component to Matt, but I handle the relationship with Degree as far as a business relationship, as well as overseeing all the employees, the crew members, and just the day-to-day business of the company.

How many people, all told, do you have working on your boat and what does it take to keep a machine like that ready to race?

Normally, we start immediately in the off-season, so around October/November, preparing the team. We’ve basically got 5 full-time guys working in the shop, then another part-time guy that comes in and works on the electrical side of the race team. There are two full computers in the boat; hydroplanes have evolved considerably since I first got involved in them in the late 90s. It takes, for one, a lot of money to have the level of crew participation that we have full-time/year round, and a lot of expertise. The boats– these aren’t cars. They’re not welded together. They’re basically aircraft. Everything is aircraft material, and one of the reasons we’re located in Seattle, the hub of the aircraft industry, is that we buy all of our materials from aircraft manufacturers. For example, we just had to purchase two new cockpits, the actual glass that goes within our cockit, and we have to buy those from a manufacturer for the F-16, from the USAF. Everything we buy, typically, comes from aircraft manufacturers, which increases the cost, but also increases the demands of precision when it comes to putting these things together. They’re machined down, glued together, and then, carbon fiberglass is laid over them. So there’s a lot of time that goes into putting together an unlimited hydroplane.

Did you ever want to be a driver of one of these machines?

I never really did. I enjoy working on them. I guess I’m a little different from my brother in that regard, where he always wanted to drive and always thought he could. Not me. I’ll leave driving to the guys that, well, I don’t want to say are crazy enough, but that’s probably the most accurate way to put it.

What do you do when the boat is in the water, and the race is in full gear?

I hold my breath.

No. I do not wear a headset. A lot of times, I will just go up in the truck and listen to whoever’s calling the race. This year it will be my brother. For insurance purposes we’re no longer allowed on the dock so we don’t get a very good view of the race itself. Typically that’s what I’ll do, go up to the truck and watch the race live, and, as i said, cross my fingers and hope everything goes well. 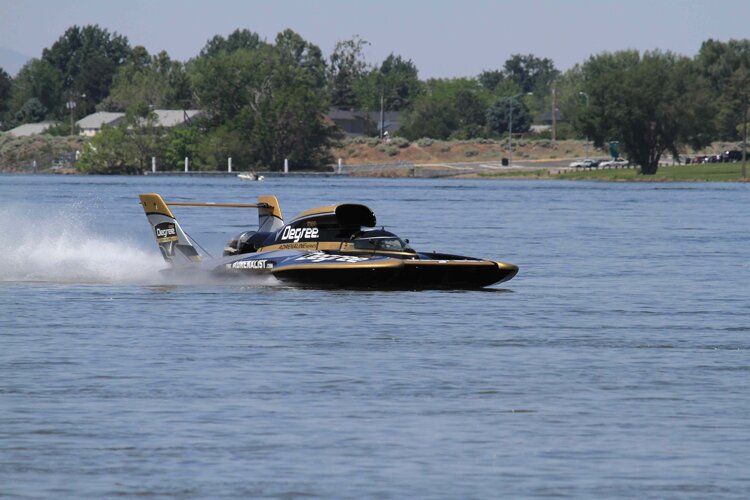 So you put in the work during the week. Do you feel like there’s almost nothing you can do once the race starts? Is that nerve-wracking?

It’s extremely nerve-wracking and, being on the business side now, and taking over that position after my dad passed away, it’s ten-fold more nerve-wracking because I understand the costs involved with going out there. Typically you don’t bang around with other boats too much, but it does happen, and if you go upside down… I know the costs involved with that and the work that’s ahead for the guys. It’s extremely nerve-wracking. You want the boat to come back the way it went out. You don’t just pull another car out of the truck like the NASCAR guys do. These things take a very long time to put together.

Are you superstitious? Do you have any customs?

I am a little bit. I was a football player, so I always had my shirt that I wore under my uniform that is always the same. I never went so crazy that I didn’t wash things, but we are superstitious. There are things that we don’t put on the boat. In boat racing they say don’t have watermelon around, don’t put green on the boat, and that kind of thing. You get into a routine, and you always try to repeat that routine, so I am a little bit superstitious in that regard.

2012 is kind of a “welcome back” for your team. What are your goals for the season?

We’re not just going out there to be out there. We’re out there to be a top 3 boat, to win as many races as we can. We’ve given the team the tools, we’ve spent the money, and our goal is to go out and win every race. But at the same time you’ve gotta be smart and not push too hard when you’re in a bad situation. Ultimately we want to win a national championship.

So you said yourself you have to find a happy medium between knowing when to take your foot off the pedal and when to go harder. How do you know when you’ve hit the sweet spot?

We’ll know where we’re at as we progress through the day. You know, in boat racing anything can happen. You have to rely on your driver. You want to push as hard as you can to be in the front, but you also have to know when it’s just not there. Sometimes its smartest to protect the position you’re in, and settle in with what we always hope will be a podium finish. The water conditions change so rapidly in unlimited hydroplane and I’ve seen so many fluke things happen, so you just have to know if you’re not gonna be in the position to win, you have to settle in, get your points, and live to fight another day.

Be sure to check out the rest of our interviews with the H1 team: