We had the chance to sit down with H1 crew chief, Matt Gregory, for his side of the story. As crew chief, Matt is in charge of keeping his eye on every aspect of the team, boat and race. Check out what Matt has to say as he shares his experiences.

Team USA is a family affair. Tell me about your role on the team, and how do you keep the boats going fast?

Well, I am the crew chief for the race team. Basically I look after everything from the hull to the motor drive train to the group of guys working on the crew. As for making it go fast, we’re always looking for that next edge, and working always with the motor drive train stuff up on the “dyno,” always tweaking for extra power, all the way back to the propellers where my brother is kinda the head honcho there looking after back of the boat. We’re always looking at ways to get more out of the propellers each time.

Is there such thing as too much power?

Well you’re talking to a guy who would say “no, there’s never enough. We always want more.” But, when it comes to dollars and cents, and keeping the parts and pieces alive and keeping the dollars down to where everybody can continue to do this for years and years and years – and also where we can continue to keep parts in place so we can keep doing this for a long time to come – we’re regulated in the amount of power we can provide to these things, which is right around 2800, 2900 horsepower.

You guys are really riding these boats hard. How long do these parts survive? Are there parts that only have one shot, and then you have to replace them?

Just to give you a couple examples, the propeller, which is roughly a $10,000-$15,000 piece,  brand new, we usually put a time value on them of about 90 to 120 minutes of run time. So, for the amount of dollars we’re putting on them, we’re paying for them, we’re not getting a ton out of them. But that’s where we’re really spending a ton of money for not a lot of longevity/life. The motors themselves, prepared by the proper person (we have the best in the business in Mark Smith, who oversees all the turbine and drive shaft work), as long as you do proper maintenance on these T53 turbines, they can live forever.

Brush us up on your sport. You said these propellers can last 90 minutes run time. Exactly how far is a race? How long do these races take?

We run heat races during the weekend. We’ll run four heat races, and each heat race is about three laps. The size of the race course is either a 2 mile or 2.5 mile race track. So, we’re running basically 6 miles in heat races, and then we’re running 5 laps in the finals, so we’re doing the 10 mile stuff. Just to translate in the time with the propellers, each time we’re out there on the water we’re out there for a total of just about 8 or 9 minutes.

How fast are you guys going out there?

How fast do you hit corners?

So you have the first race of the season coming up in July. Are you revv’d up? Are your boats ready to roll?

You wanna talk about adrenaline? I am just jacked up. We’ve been away for 3 and a half going on 4 years. This has been a dream to bring this all back to fruition, and uh, just fired up! To get this beautiful piece back on the water. The colors, with the Degree Men paint scheme, is just absolutely gorgeous and it’s going to be a rocket ship back on the water.

How come it’s not you driving the boat on the water?

I’ve been racing boats with my family. Started with my dad and my brother, you know, sweeping up oil, and doing stuff at 11-12 years old. But, you know, I’m a big guy – I’m 6’8″ – so, since I was a kid, I just kept growing and growing, and it made it physically difficult for me to fit in one of these things. It’s been a dream to drive one of these forever, but the physical limitations have kept me from doing so. 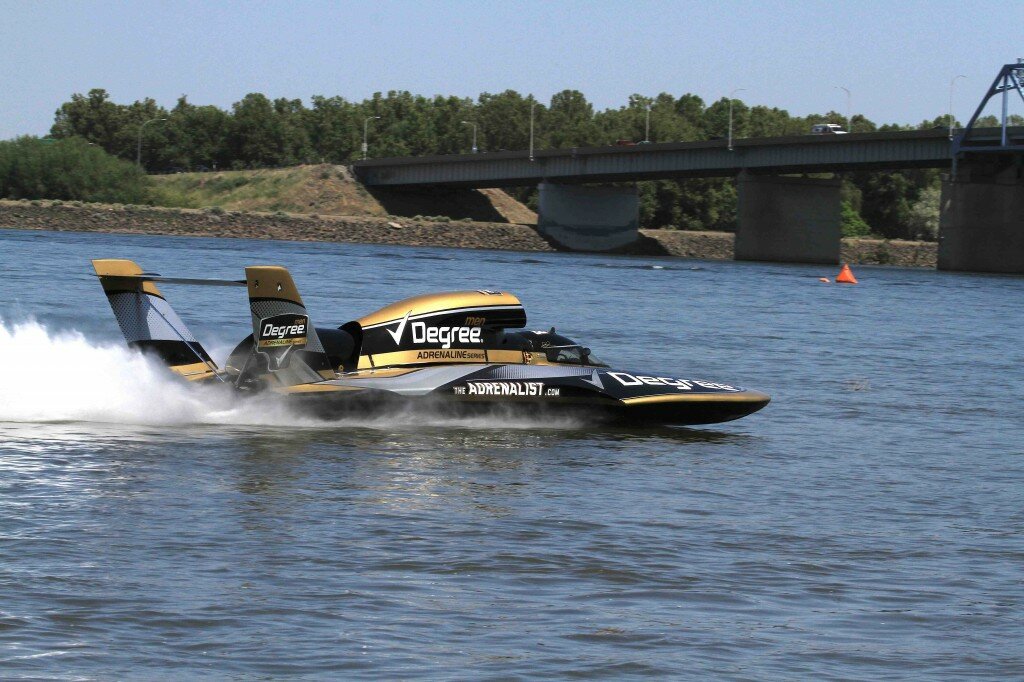 You’ve seen some tense moments on the circuit. What do you do when you’re on the sideline and you’re not sure whether things are going right or wrong? How do you deal with the rush?

I’m in a crazy situation. You know, not only am I looking after making the decisions on what we’re going to do to go out there and succeed on the race course, but I’m also, during the race, I’m talking to the driver on the radio constantly. I’m his eyes and ears on the race course – what he can’t see with his own eyes. And we come up with the strategy on the fly. That’s where your heart really starts pumping and your adrenaline starts racing through your veins. It’s coming up with those quick decisions to guide and help guide scott out there on the race course. So, for me, the guy in the seat has got all the adrenaline because he’s basically riding a missile. And I’m basically his eyes and ears, kinda going along for the ride with him, just sitting on the beach going through it all.

I know the crashes can be pretty devastating. What percentage of them are fatal? Can somebody survive a crash a 190 mph?

Absolutely. This boat, when it ran in 2008, was doing about 195 at the end of the straightaway and it blew over backwards. Went in into the water backwards at about 140 mph. And the gentleman at the time, Dave Bryant, jumped out within about 13 seconds — not a bruise or scratch on him. And we’ve really brought the safety level to a new height. To give you an idea… unfortunately, we were the last team to fatally lose a driver, back in 2000. It was kind of a… how do you put it… it was just one of those freak, freak, freak deals. We learned a lot from it, but at that time it was one of the first fatalities in almost 15 years. So when you go back over the last 30 years, we’ve only lost a handful of drivers, compared to the 60s-70s, we had 3 go in one weekend. It’s been dubbed, “Black Sunday.” We’ve brought the safety of this sport way up with the creation of composite cockpits, with air systems and restraint systems, and the HANS device. When we lost George Stratton in 2000, who was our driver at the time, Dale Earnhardt, who’s obviously well known from the sport of NASCAR, died 6 months later in Daytona from basically the same injury, a fatal neck/skull fracture, and uh, it’s an instantaneous deal. But that’s really what brought the HANS device, which is a head-and-neck-restraint, into our sport and almost all motorsports.

Is Scott Liddycoat ready to drive your boat?

You’re talking about a guy who’s a genius when it comes to woodworking and a lot of things off the race course, but where he’s absolutely in his element is behind the wheel of a race boat. He’s been doing it for 20 years, and he’s just a natural. Everything about what he does is a natural reaction. There’s something about going fast, and the competition level being very high that drives him. So, I think, you know, the great question is what part about the race gets you to the point where you kinda take over, your adrenaline takes over, and kinda just guides you. But you know, natural talent – and this is going quite a way – watching how he drives a race boat, you can kinda relate him to the way Ayrton Senna is when he gets behind the wheel. He’s just calm, cool and collected. He’s more ready than anyone.

Be sure to check out our other interviews with the rest of the H1 team: