Every city has its own vibe and culture, especially when it comes to biking. New York is a special place when it comes to bikes, between the famously brash drivers and the straight flat streets, you have a combination of factors that can make biking New York its own extreme sport. Instead of competing with your peers, your competition is the steel, crowds and asphalt.

If you didn’t have a chance to get out of the city this weekend and do something adventurous, Manhattan biking can give you an adrenaline fix on your way to work. Don’t believe that hype about all the new bike lanes making New York bike friendly; you still have to be on your toes. Here are a few things to consider when biking around the big apple. 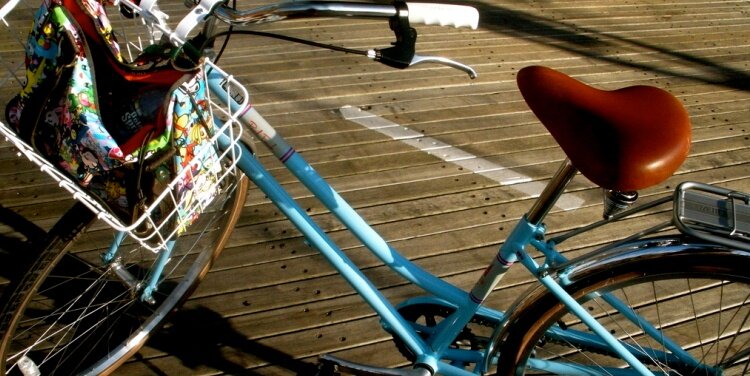 Equip Yourself With The Necessary Gear

Before you can bike in the city you’ll need a bike, obviously. You’ll have to make a fundamental decision when buying the bike: how many speeds do you want?

In hillier, West Coast cities, your bike has to have enough gears to get you up various hills and, sometimes, even mountains. In New York, however, your terrain, for the most part, is flat. The biggest hill you’ll take on is actually crossing one of the bridges. As a result, a lot of New Yorkers ride single-speeds or the occasional 3-speed. This is fine if you want a mellow ride, but it ignores some vital aspects of NY cycling.

The first is that there really are some beautifully long, straight bike paths – even on streets with timed lights, allowing you to cruise through – and these straightaways can mean serious speed. Because a single-speed compromises between taking small hills, you can’t really get enough power to really get up to speed in these straightaways.

The Westside bike path, depending on how you count, is about 10-miles long, totally flat, with very few turns or interruptions. In high gear, you can really blaze down Manhattan, turning each morning into your own personal speed trial, and leaving the commute in your dust. Having a nice 10-speed road bike can make all the difference. 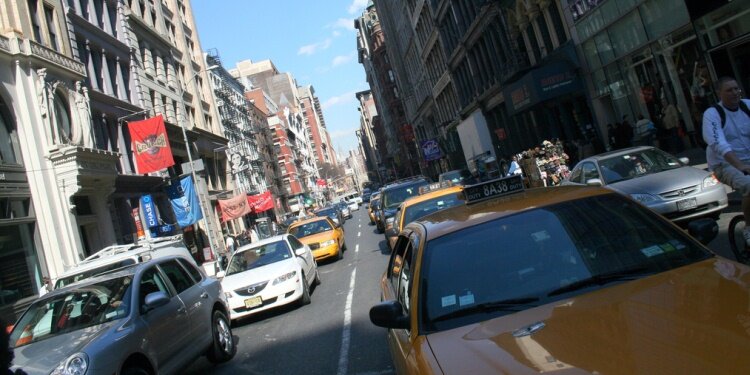 The other benefit to some modest gears is the ability to navigate traffic with ease. While bike paths are everywhere, there are certain places where you’ll have to duke it out with the cabbies, where the fastest way is to often jump into some traffic.

Your average New York street isn’t ideal biking territory. The side lanes are often occupied by parked trucks off-loading, taxis stopping suddenly and roadwork. The middle lanes are full of angry cab drivers, and the asphalt is full of potholes. This all means that you have to be thinking, dodging, speeding up and braking fast, weaving in and out of cars at a light to get in front of them and beat them when the traffic clears, or hanging back to let a heard of yellow cabs trample past.

Again, for this a handful of gears will really help you out. On a nice straight away you can keep pace with traffic, then shift down and accelerate quickly enough to keep up with the cars off the light, or swim in between.

It’s also very important for cycling with traffic to make sure your brakes are in good condition. Check those pads, make sure your cables don’t have too much give. 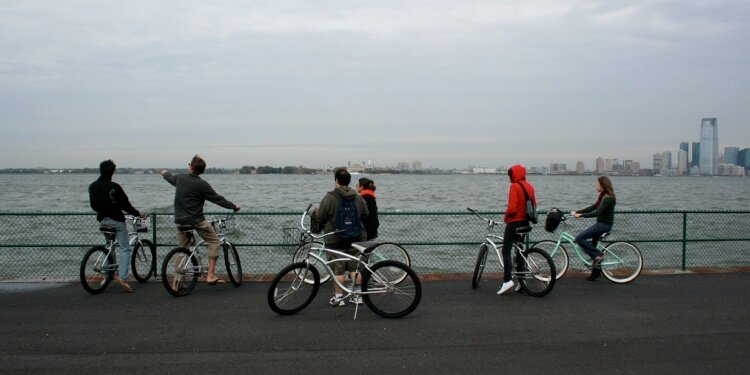 The truth is both paths and roads have their benefits, both in terms of commute and sportsmanship. As mentioned above, there are some nice long paths, not only in Manhattan, but in Brooklyn and Queens. These paths are not just straight, they have the added benefit of generally going in useful directions. Some are dedicated bike only paths, some are well-marked and spaced bike lanes on the street.

Eventually they run out or you have to turn. At this point you might notice that the bike lane system has big gaps in it, and sections that seem more like abstract art than city planning.

When the bike lane is no longer an option, you’ll have to make your own road. This is when you become less like a sprinter and more like a receiver, threading your way through the cars, slipping between parked UPS trucks and hapless pedestrians. This a more technical and risky game than the straight away sprint, and more dangerous. Everyone takes a crash or a spill at some point, but it’s a thrilling feeling to keep up with the cars and make it to the next intersection right as the cars are stopped by a red light.

Check out the official NYC bike map for all the city’s paths, lanes and greenways. 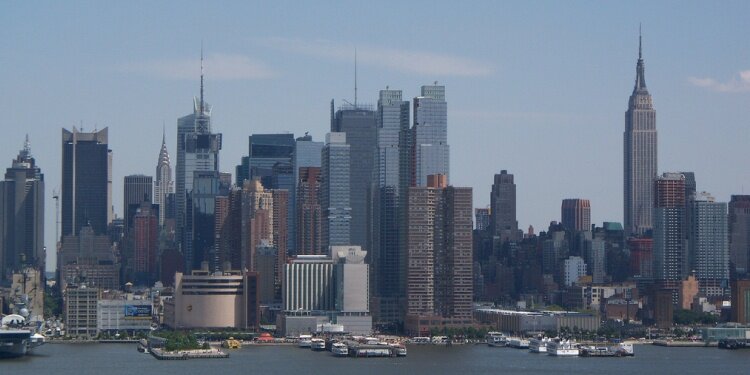 This has probably got you thinking about snow, but another thing people don’t always associate with New York is heat. It gets pretty hot and humid, and when you’re racing the cars you’re bound to get sweaty. This presents you with a slight problem. In other cities, showing up for work or a meeting with a bit of sweat, or mud or rain, is acceptable. In NY, you might want to keep a nice shirt in your bag at the ready.

The big problem is, of course, the snow, rain and cold. They do a fairly good job of clearing the streets after a snowfall, but watch out for ice. What might’ve been a skid or fishtail on a country road can get you hit by a garbage truck here. Make sure your tires can grip. Many people pack up their bikes for the winter, but except for when there’s really heavy snow, I’ve found that with good gloves, hat and something to keep your nose from falling off, a brisk pace will keep you warm and with the less hearty souls indoors, turn you into the king of the bike lanes. 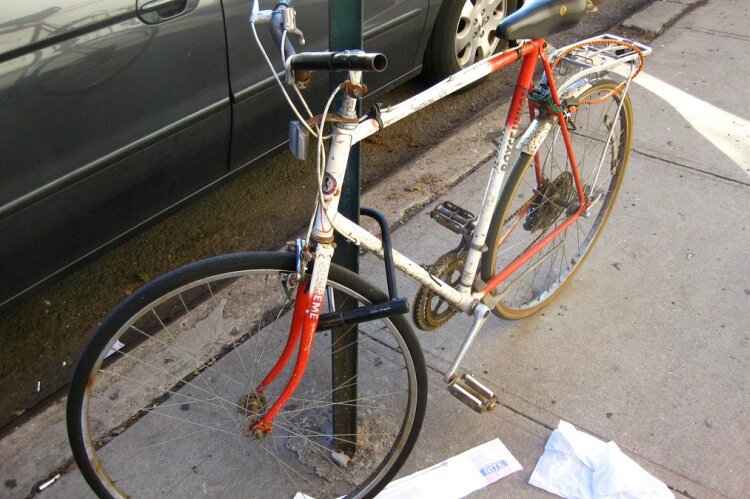 Some mention has to made of this because it is a persistent problem. Some people will tell you that a heavy chain is the only way to go, and these do offer good protection, but they weigh you down and are bulky. People who advocate these claim that they allow you to lock your bike anywhere; but the truth is that New York is so full of bike stands, street signs, and construction scaffolding that you are never at a loss for a place to attach your trusty U-lock. U-locks are lighter and easier to carry. Just remember to lock you rear wheel up too. 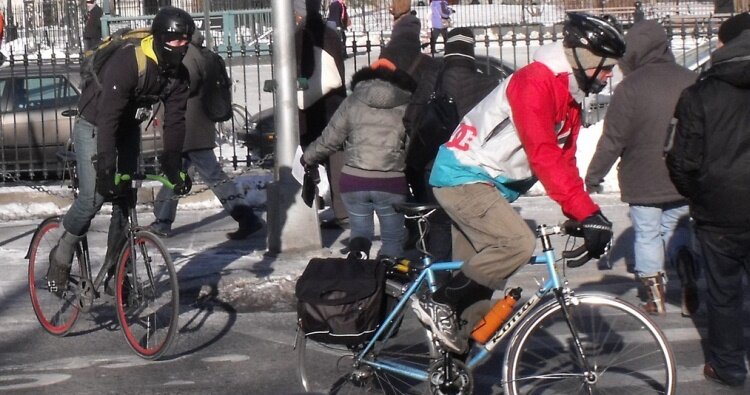 Just remember, you could turn biking into just another way of commuting, and hope to get a little kick out of the fact that you helped the planet. Or, you could realize that you’ve been given a giant urban obstacle course to play with and take NYC biking for all it can be, a quick sport and adrenaline fix each morning before and after work.