When people say “age ain’t nothing but a number,” they usually mean it in a sort of cute, almost patronizing kind of way. Like, “hey, you can still drink a beer after 9 pm, dad. I guess age ain’t nothing but a number, right?” Pro sports, however, are different. Very seldom are elders encouraged to participate at the highest levels of athletic competition. In most cases, thirty-five is about as good as ninety and pro careers are short lived.

There are, however, on occasion, athletes so vibrant, so ageless, so ably committed to competition, that they fight on for years past their preordained “prime.”

Today, we salute these warriors: shining examples of determination, perseverance and talent. Readers, we present to you some of the oldest pro athletes in the history of sport.

Most of us in our twenties and thirties probably have a difficult time fathoming the chutzpah one need have to take it on the chin from some of the strongest, most relentless fighters in combat sports. We who are supposed to be young, spry and full of life, frankly, quake at the thought of how quickly our glass jaws would shatter if placed inside an MMA ring. So, when we think about Skip Hall, who became the oldest pro-debuting MMA fighter in history at the age of 57 and continued to mix it up in the ring until he was a mind-boggling 63, we can’t help but marvel a little. This man competed successfully at the highest level against men less than half his age. To put it in perspective: picture your sixty-something dad fighting a stronger,  more conditioned, version of you, and winning. Enough said.

Let’s hear it for female pro athletes, and Nancy Lieberman in particular. Lieberman captured the basketball spotlight at age 17, after she won a spot on the USA Women’s Pan American team in 1975. She then went on to amass 961 assists, 2,430 points and 1,167 rebounds during an illustrious college career at Old Dominion University. She turned pro in the early 80s when she joined the Women’s Basketball League (WBL). Ironically, what might be her most notable accomplishment came after all the awards and titles and Olympic invitations and Hall of Fame inductions. On July 24, 2008, at 50 years old, Lieberman suited up for the WNBA’s Detroit Shock (the very same team she once coached and managed), breaking the record for oldest woman to play in the league. The record she broke was her own, set in 1997, the WNBA’s first season. Lieberman played one game for the Shock, and had two assists… pretty incredible considering she was a half century old.

They call him “Mr. Hockey” for a reason. A four-time Stanley Cup winner famous for his ability to score almost at will, Howe is one of the most revered players in history. In 1998, he was listed #3 on Hockey News’s List of Top 100 Players of All Time. As talented as he was, however, the element of his career that’s garnered him the most fame has been extreme longevity. When the  Detroit Vipers signed Howe to a one game contract in 1997, he not only became the oldest player to participate in a professional hockey match (at 70 years old), but he also nabbed the honor of being the only player in pro hockey history to compete at the professional level in, get this, six different decades. He began his career in the 1940s and played across different teams and in different leagues from then until this ultimate, record-clinching appearance.

85 – that’s the number of professional fights Saoul Mamby fought over the course of his storied 39-year career. Incredible, especially considering he amassed an impressive record of 25-5 before ever setting foot in a professional ring. A welterweight, Mamby won the WBC junior class title after traveling to South Korea to beat Kim Sang-Hyun in 1980. He defended the belt for over two years and fought his final title bout against Billy Costello in 1984. Even after his time as title contender expired, Mamby’s love of boxing kept him in the ring until 2000, into his 50s, when the California State athletic commission forced his retirement. Then, in 2008, at 60 years old and a svelte 149 1/2 pounds, Mamby did the unthinkable and put on his old gloves to battle Anthony Osbourne. He lost the ten-round fight, but became the oldest boxer to appear in an officially sanctioned match. 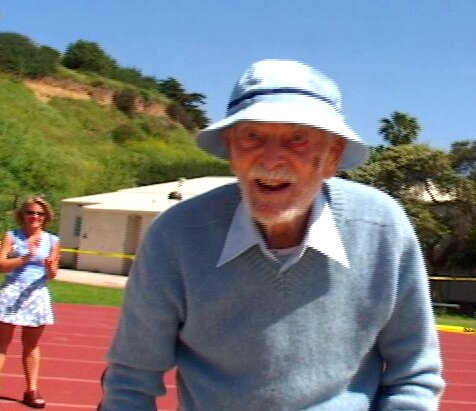 We searched the farthest reaches of the Internet, but for John Whittemore no video could we find. You know what? It’s kind of fitting. Seeing him in action would probably detract from the amazing feat this javelin and discus tosser and “world’s oldest athlete” accomplished when he competed in a Master’s Track competition in October of 2004, at the age of… 105!  A lifelong talent, he attended Stanford University where he excelled on the baseball and tennis teams and, after graduation, began a  commitment to track and field that took him all over the country, from the Penn Relays to the USATF National Indoor Championships to Good Morning America and Jay Leno’s late night stage. Sadly, he died in 2005. Having trouble getting through your head just how old Whittemore was? Well, he used to reminisce about riding a horse to high school. A horse. Talk about incredible genes.