A few months ago, we covered a list of food for survivalists; food that Adrenalists could safely eat if they found themselves stranded in the wild. Now, we turn our focus to the world’s most dangerous foods, which changes the rules of the game a bit. While each of these items can be ingested, one must be trained to safely select and prepare the dishes. In some cases, familiarity still isn’t a protection against severe injury or death. As Adrenalists, we know that in dire circumstances where your life’s already on the line, it’s the risks you take that ensure your survival and the survival of those around you. That said, we implore you: read over these six descriptions carefully. You owe it to yourself and your fellow adventurers.

The mere sight of maggots is usually enough to send people running in the other direction. Imagine if these creepy wigglers were burrowed inside a cheese that you were expected to eat? Casu marzu is a type of Pecorino cheese served on Italy’s island of Sardinia wherein cheese flies are allowed to lay their eggs. As the eggs hatch into maggots, the baby flies chew through the cheese, breaking down fats and softening the final product for human consumption. Obviously, there’s an element of delicacy here, but there’s also a serious danger posed by the possibility of ingesting maggots. Diarrhea and vomiting may result. Though the cheese is banned, it’s still consumed in Italy. A safe way to enjoy the sped up fermentation process is to place the cheese in a sealed plastic bag to suffocate the maggots, thus allowing you to chow down on a meal sans insects. Of course, you’ll still know they were there.

If you find yourself in dire straights near the sea and an octopus presents itself as an available food source, there’s a good chance you can eat it (provided it’s not of the blue ringed variety, as our Poisonous Animal Bite Survival Guide will tell you). Just be sure to chew thoroughly. Live octopus, referred to by Koreans as sannakji, is a delicacy enjoyed in Korea and by many Americans at various domestic specialty restaurants. So what’s so bad about it? Live octopuses’ suction cups can get stuck in your throat and cause asphyxiation. Though the cups don’t provide any hazard if they’re well chewed, those who have a tendency to wolf down meals would be wise to eat slowly or else the sannakji you’re enjoying may literally take your breath away.

When we think tasty seafood, blowfish aren’t the first specimens that cross our minds and, unless your adventure partner is a sushi chef specially trained to prepare them, it probably shouldn’t cross yours either. A delicacy in Japan, called “fugu,” a 6-pound blowfish reportedly has enough toxins in its body to, “take out at least 32 healthy adults,” according to British food critic Tom Parker Bowles. A methodical preparation, in which poisonous pieces of the fish are severed from its body, is required before the blowfish can be safely ingested by humans. For our money, this one’s too dangerous to risk. It’s edible, but probably best to stay away from unless you’ve got a ton of confidence in your chef.

If you’re starving and on the hunt for food, the sight of rhubarb might seem like a Godsend, and it is, as long as you don’t munch on the leaves. While the rhubarb plant’s stalks are edible and flavorful, its leaves are so poisonous that those who ingest them have been known to suffer kidney failure and, in very extreme cases, death. The upside is: safe rhubarb preparation is achievable for the layman who’s got no culinary experience whatsoever (just chop off the leaves). This is not a fugu scenario.

Lost in Namibia and convinced you won’t be able to muster the energy to walk another step, you hear the croak of a giant bullfrog in a nearby patch of weeds. You remember hearing that they were edible, but you’re a little wary of taking the plunge. Is there some red flag you’re forgetting? Yes there is and you’d better make sure you remember it before doing any meal prep. Premature bullfrogs carry a potent poison that, if ingested, can cause kidney failure. The takeaway here is: be sure you know how to identify a mature bullfrog. If you don’t, you’ll be glad you mustered the energy to walk on. 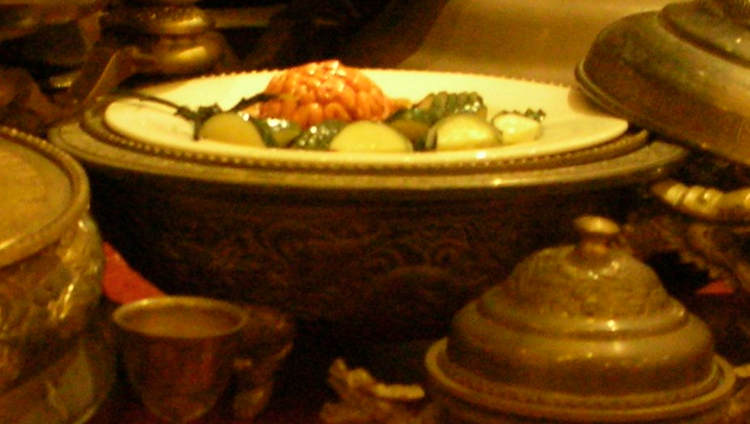 Chances are you’ll be able to find something far more appetizing than monkey brains if you’re struggling for survival in a region where eating monkey brains is an option (remember: bugs are an excellent source of protein). Even if you’re intrigued by the prospect of a gamey meal and you’ve got the wherewithal to catch and scalp a primate, your worries are far from over because some monkeys’ brains are infected with Variant Creutzfeldt-Jakob disease which, similar to mad cow, will destroy humans’ neurological functioning and result in death. Unless you happen to be adventuring with a Variant Creutzfeldt-Jakob testing kit, stay far away.