Full Contact Jousting makes for some addictive viewing, as anyone who has seen the Nat Geo series, Knights of Mayhem, will agree.

Touted as the next extreme sport, full-contact jousting mixes speed and fury with simplicity and history. In our digital society, there is something irresistibly compelling about the sight of armored knights riding at each other full-tilt and colliding with hurtling truck force.

Here’s your chance to peek behind the pageantry and get a full, physical sense of the explosive sport. 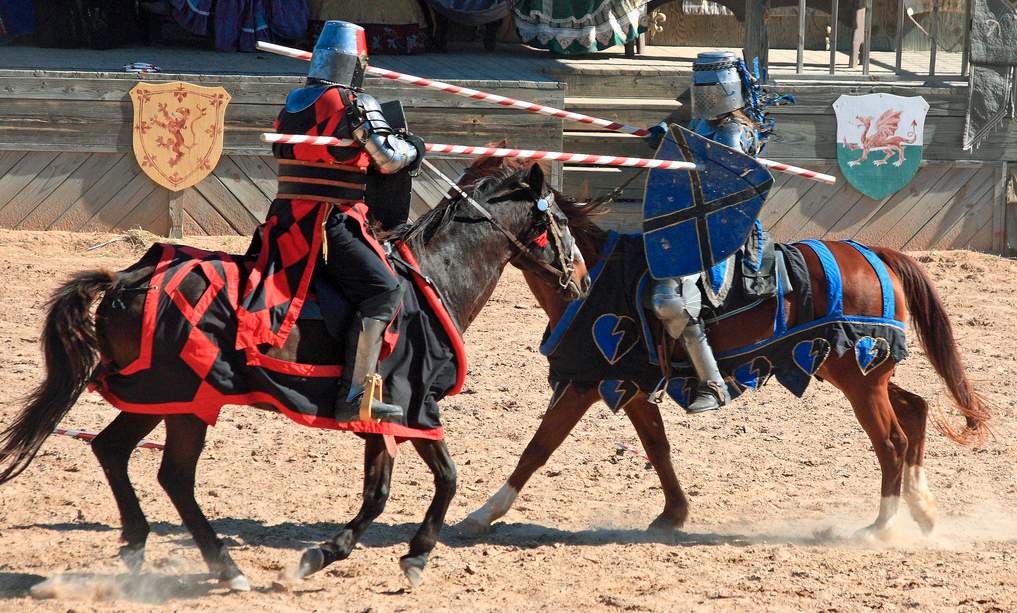 1. The story of jousting begins with the rise of knights as a fighting force in Middle Ages Europe in the 10th century. Tournaments began as a means for knights to practice horsemanship skills and prove their mastery of wielding a lance. A joust unfolded on an open field. The word “joust” just meant “meeting”, only it was one with a point.

2. Despite its macho overtones, American jousting arose from a merry institution with more than a touch of Monty Python and the Holy Grail about it. That is, the Renaissance fair: a gaudy mosaic of craft show, carnival and historic re-enactment featuring damsels and jesters.

3. The Renaissance fair – or “fayre” as the medievally minded sometimes spell it – sprang up in Southern California in the 1960s, set to make inroads across America. In the late 1970s, fairs jazzed up their act by adding “jousts”, which had a fantasy feel. The knights were actors performing a choreographed horseback show featuring breakaway lances and minimal clanging.

4. Hardcore jousting arose because some people wanted to push the envelope. The formula for jousting remains the same as it has always been since the age of Sir Lancelot and Sir Galahad. On horseback, two armor-clad adversaries charge at each other, brandishing 10-foot-long lances. The aim: break your lance against your enemy’s shield or the metal “grand guard” plate bolted to his chest. In the American version of the mud-and-thunder sport, unsaddling your rival is another cool way of notching up points.

5. Full-contact jousters wear 150 pounds of steel armor, sat astride hulking 2,000-pound warhorses. When they tilt their hard hemlock lances, jousters reach speeds of up to 30-mph.

6. Forget the pageantry. The Hummer-driving pioneer of the sport, mixed martial artist Charlie Andrews is on record as saying that he just enjoys the impact side. “I like hitting you. I like getting hit. I like competing man to man to see who the better man is that day.”

7. Charlie Andrews is the World Champion of Full Contact Heavy Armored Jousting and the strongest, fiercest competitor in the field. A member of California’s Chukchansi tribe, Andrews stands 6-foot-4. Andrews jousts because he sees the sport as one of the most extreme ever devised.

8. Few would contest that full-contact jousting is deeply extreme. A jouster’s lance generates a force of 50,000 pounds per square inch – the equivalent of having your thumb whacked with a sledgehammer.

9. In the shadows, a silent duel rages between full-contact American jousters and their soft-core, European-style counterparts. The US “full contact” camp calls the combat that the Europeans enjoy “a sorority pillow fight.” The Euro-knights dismiss their antagonists as trash can-like braggarts astride absurdly monstrous steeds.

10. Whatever country you come from, the worst thing you can do in a jousting match is cringe, or shrink from a blow. You are meant to face the thundering stallion coming straight at you head-on and take it on the chest. Intense.