Sorry, Johnny Knoxville. It’s not that we don’t love you. We just… couldn’t. These are the greatest daredevils of our times. From jumping buses to getting shot with cannonballs, nothing these guys do is short of extraordinary. Most of the adrenaline-fueled activities we practice and watch today owe there beginnings to the stunts these men have performed. At the end of the day, the title of best daredevil goes to the man or woman who gets our blood-pumping the most, so who’s your favorite daredevil?

Anyone who says regular Joes can’t be daredevils has never heard of truck driver turned balloon airship designer, Larry Walters. Armed with little more than a patio chair, 45 helium-filled weather balloons (much larger than your average birthday variety), and a hunger for exploring the unknown, Walters became the first person to ascend into controlled airspace using a piece of lawn furniture when, in 1982, he flew his homemade craft dubbed “Inspiration I” from his home in San Pedro, California to Los Angeles International airport, reaching an altitude of 15,000 feet. Plagued by poor eye sight, Walters was unable to fulfill his dream of becoming a US Air Force pilot and this adventure, first conceived when he was a teenager, was his attempt at realizing his dream.  Unfortunately, it wasn’t totally thought through. Walters planned on descending by shooting balloons with a pellet gun he carried aboard, but after dropping the gun overboard minutes after popping the first couple balloons, he found himself on a wayward journey he couldn’t quite control. After 45 minutes in the air, he landed on a Long Beach power line, causing a temporary outage. Though Walter was immediately arrested upon landing (for flying in regulated airspace and other violations), he was reportedly unbroken by the course of events,  famously saying:  “A man can’t just sit around.” His feat has been the subject of many television specials and documentary segments, one of which we’ve provided for you above. Enjoy, but, do us a favor and stick to airplanes.

We’ve talked about Alain Robert, the french spiderman, before, and for good reason. This guy is crazy and cool and incredible enough to deserve multiple mentions. Robert first discovered his love of climbing while sneaking into his parents’ eighth-story apartment. Now 50-years-old, he’s mounted some of the tallest skyscrapers in the world, enduring imprisonment and risking death, without the wimpy assistance of harnesses or ropes. Throughout his long and storied career, he’s battled vertigo and fall-induced paralysis that’s rendered him more than 60 percent disabled. Less showy than passionate, more a technician than a sideshow act, Robert’s daredevil persona seems more highbrow than the carnival community that bore so many of the freakishly talented cohorts. If you find yourself contesting Robert’s spot on this prestigious (if we do say so ourselves) list, put yourself in his shoes and imagine looking down from thirty– nay fifty–stories in the air. Imagine every one of your muscles is pushed to its limit, in spasm under the pressure of a relentless ascent. Imagine you’re all alone and one wrong move will end it all. Okay, stop shaking. Sorry. We were just trying to prove a point.

Always on a bike, always adorned with tassels, and always getting into trouble, Evel Knievel, as much a part of the American ethos as American Pie, is a fascinating case study as much because of what he did right as what he did wrong. First entering the daredevil biz in 1966, Knievel didn’t gain national recognition until 1967 when he jumped Caesar Palace’s fountain on New Year’s Eve. After a failed landing, he spent 29 days in a coma. In many ways, that first flawed foray into the national spotlight would be representative of the rest of his time there. Throughout his career and despite his many great successes, Knievel’s unrelenting desire to push the envelope farther than it was meant to be pushed ultimately resulted in numerous botched stunts and resulting serious health afflictions. Off the bike, he was a hothead and spendthrift who spent time in jail for assault and, despite reportedly earning many millions of dollars over the course of his career, declared bankruptcy in 1981. Moral of the story: even adrenalists need to function in society, so be as good at living life as you are skilled at tempting death…and maybe consider slowing down after you spend 29 days of your life in a coma.  Just a suggestion, dudes. 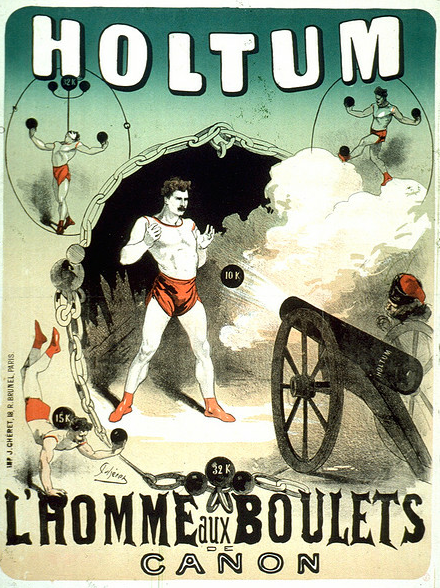 While you may not know John Holtum’s name, we’re almost positive you’re familiar with his place in popular culture. Whether inspiring a Looney Toons cartoon or adorning the wall in a pictorial tribute to the American circus, the man who caught the cannonball with his bare stomach is something of an icon. After a brief tenure training as a common circus-grade strongman in and around San Francisco in the late 1800s, Holtum returned to his native Europe to do the unthinkable. After two years and some very serious injuries (including the loss of multiple fingers), he found a way to successfully catch a REAL cannonball…shot out of a REAL cannon, using only a pair of gloves and a chest pad to mute the force of the projectile’s impact. Some believed the ball was lighter than normal or even hollow inside, but despite public doubt and a standing 3,000 franc offer Holtum made to anyone who would challenge him, no dissenter ever dared try the stunt Holtum so fearlessly pioneered.

German-born Harry Houdini (birth name Erik Weisz) is, arguably the world’s most renowned and celebrated magician, illusionist, stuntman, and daredevil. His name is synonymous with achieving what seems to be impossible. Almost immediately after his family’s US arrival from Budapest in 1878, young Harry started making a name for himself, first as a trapeze artist then as a cross country runner. But his big break came in Woodstock, Illinois when he met manager Martin Beck who, impressed with his handcuff escape act, began booking him on the vaudeville circuit. And the rest, as they say, is history. From his Chinese Water Torture Cell stunt (where Houdini was submerged within a metal cage and locked within a larger cell) to his notorious Suspended Straight Jacket Escape, Houdini was as much an innovator as he was a madman. Check out this video of his Handcuff Bridge Jump for proof. After all these years and all the daredevils who’ve succeeded him, Houdini may still take the cake. What do you think?